“A swarm in July ain’t worth a fly”… at least that’s what they say.  In the Seattle area I would agree that swarms this time of year or later are basically doomed unless a beekeeper makes an effort AND some investment to save them.  A big swarm could build enough comb but are unlikely to fill it unless they are near huge patches of Knotweed (which doesn’t exist in many areas in the city) or maybe you haul them up to the mountains for Fireweed.  You could also steal honey and comb from other hives or get a couple 50lb bags of sugar and feed it as syrup over the next two months and hope they store enough for winter and also raise good winter bees.  However who says hobbies have to make money and if bees need saving then go for it.  If you are wondering where this is headed keep reading.

I split a hive on the 13th and on the 28th rather than having a new queen killing her sisters I had a new queen that decided to be a pacifist and leave the hive in a tiny swarm.  Having already done a split the hive was depopulated and being that the nectar flow is now over I was surprised to discover that they would even try to swarm.

While I call the queen a pacifist for not wanting to kill her sisters the reality is that this wasn’t a queen decision but rather the collective workers.  Maybe they aren’t localized enough to know that we have a long dearth coming, or perhaps that genetic instinct has been washed out because beekeepers always step in to prop them up with late summer feeding efforts.  Another thought is that the heavy rains in the last week might have created a surge in plant nectar production that is misleading their instinct that a dearth is here.  Who knows, maybe they know something I don’t and it’s going to be a rainy August and flowers will be plentiful.  Maybe I should buy a lotto ticket.

The small swarm hiding in the branches. 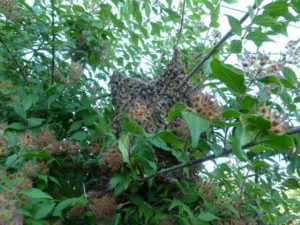 The swarm was about 1.5 pounds and I hived them with some old comb, but have no idea how they would expect to build comb and fill it with stores this time of year.  Not to mention with a virgin queen still has to successfully mate. I will give them a few resources and see how they do in the next few weeks.  I’m curious to see how they fare and if the risk pays off.  I’ll give them some honey and syrup to keep them alive to see if they can survive the winter.

After hiving the swarm I looked through the originating hive and found another queen running around killing the others and piping quite authoritatively.  There were a few queen’s cells in the process of emerging that had not yet been killed and I was able to cage them as a backup.  I had one fly off while I was trying to get her to go in a queen cage and I stood still watching her go up up and away into the air.  She never did come back and I held still waiting so she could orient to me.  Having not come from a hive I have no idea where she will end up but wouldn’t be surprised if she tried to enter one of the queen right hives nearby, which would not end well for her.  However being that is was evening I also wouldn’t be surprised if a bird found her before morning.