Witch Hazel (Hamamelis) includes several different species that are native to Eastern North America, China, and Japan ranging in colors from yellow to red that bloom during winter on bare branches after the leaves have fallen.  Looking around our northwest gardens the species we typically find are from Japan (H. japonica) and China (H. mollis) or crosses between the two.  The American species start blooming in late fall between October and December, and the Asian species typically bloom between January and March.  They start blooming while the previous year’s seeds are still on the branches and thus get the Latin name hamamelis which means “together with fruit”.  The seed pods contain two black seeds and will pop when mature throwing the seeds a short distance away.  When not showing off their impressive winter blooms, they have attractive soft green leaves in summer.  They need to be planted in a sunny or mostly sunny spot that has fertile soil, and will also need regular watering during dry summer months. 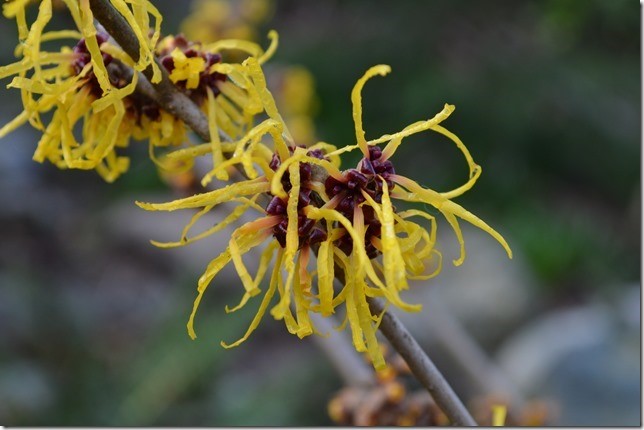